Verification according to SAMM: Requirements-Driven Testing in Application Security

This article is part of a series that explores the practices of the OWASP SAMM (Software Assurance Maturity Model) [1] framework. This article will discuss Requirements-Driven Testing in Application Security for the Verification business area.

As defined by SAMM, Security Requirements-Based Testing for Applications is a technique used to ensure that an application meets the specified security requirements in the project. It can involve conducting pentests and both user interface and code security tests.

This is a crucial step in the software development process as it allows us to verify that the application is free of vulnerabilities that could compromise the security of users.

Requirements-driven testing is part of the verification and validation activities of the software development lifecycle. They are performed to ensure that a system meets previously established security requirements.

1. It is important to observe the following steps for conducting requirements-driven testing:

2. Identify application security requirements and document them clearly and accurately;

3. Plan the tests to be carried out, which tools to use, and those responsible for execution;

4. Run the tests and record the results;

5. Analyze the results to identify any vulnerabilities or security issues found;

To define the security requirements for a system, conduct an analysis of potential threats, vulnerabilities, and security measures within the scope of the system being tested. Various techniques can be employed for this analysis, each with its advantages and drawbacks.

One technique could involve using requirements identified through threat modeling (as shown in Figure 1) or a pre-established list of requirements such as the ASVS (Application Security Verification Standard). These techniques can be used separately or in combination, depending on the specific needs and context of the project. When selecting and implementing these techniques, keep in mind the particular scenario and environment of the application being tested.

During testing, evaluators or testers aim to uncover vulnerabilities and other security weaknesses that could affect the application. They also verify that the application adheres to the security policies and standards set by the company. Testing can be carried out by various types of professionals, such as security engineers, test analysts, and software developers.

In Figure 1, we see a list of requirements created from a threat modeling carried out in Conviso Platform to perform an API Test. 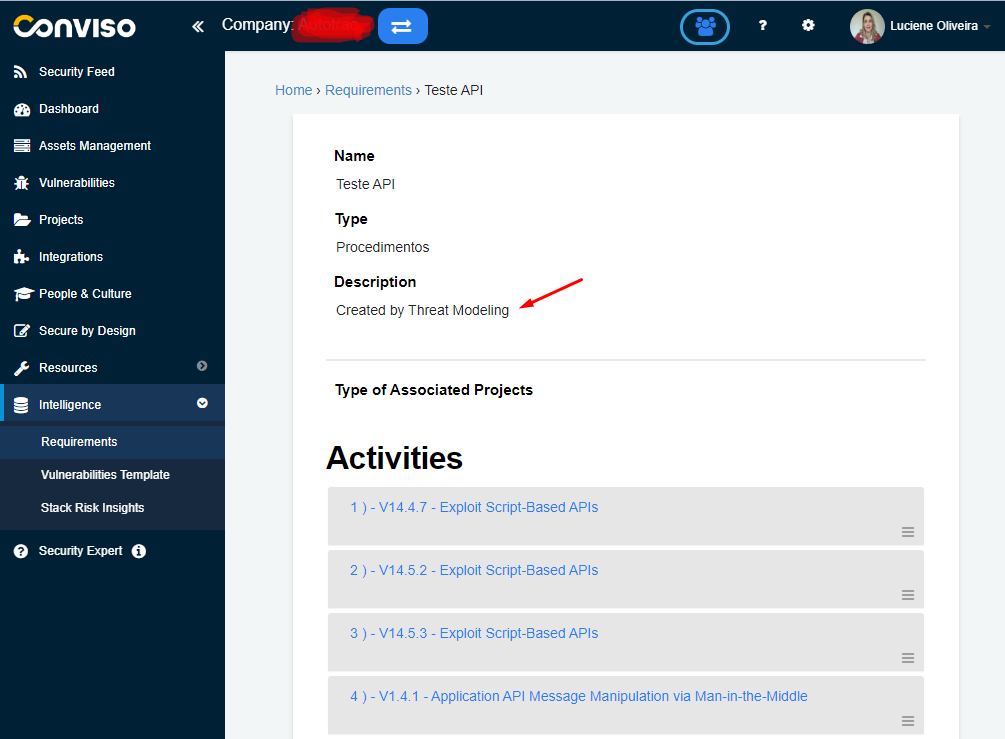 Requirement-based testing is complementary to other security practices, such as automated testing (AST), as shown in Figure 2.

During the design phase, security requirement-based testing for applications may include conducting a risk analysis to identify the main security risks for the software and how to mitigate them. During the development phase, testing may include checking the code to ensure it adheres to established security standards and performing penetration testing to verify the software’s resistance to cyber-attacks.

Each type of test aims to verify a specific area of the application’s security.

If the password is stored in encrypted form, the test is deemed successful.

However, if the password is not stored in this way, the test will be considered failed, and the development team will need to address and fix the issue before the system can be deployed to production.

As another example, consider a scenario where the requirement is to ensure that the system is protected against brute force attacks. In this case, a security requirement-oriented test might involve attempting to log in with incorrect passwords multiple times in a row and checking whether the system blocks the user account or the request’s source after a certain number of failed attempts. The test is successful if the system behaves as specified in the security requirement. However, if the system does not crash or block the user as expected, the test has failed, and the issue must be addressed and resolved before the system can be deployed to production.

It’s important to note that these are just a few examples to provide context and do not cover all types of tests that could be conducted for a given set of requirements.

SAMM provides a framework for assessing and improving software security. It is divided into three maturity levels, each with a set of specific security practices and two streams: Control Verification – Stream A and Testing for misuse/abuse – Stream B.

Conviso Platform [2] is a comprehensive suite of application security verification tools that follows the SAMM framework and can perform requirement-driven testing in application security. It offers several features, such as code analysis and automated testing, that help developers identify vulnerabilities (Figure 1) in their applications and provide recommendations for fixing them. It can also monitor application security in real time and evaluate the effectiveness of implemented security measures.

In addition to its capabilities for identifying and fixing vulnerabilities, Conviso Platform can also help organizations efficiently and effectively implement and manage various types of security testing, including code reviews and penetration tests. Its integrated platform provides a centralized, streamlined approach to managing these tests, allowing organizations to ensure their applications’ security confidently.

Some of Conviso’s products that meet these purposes include:

Note: In the following article, we will delve further into the topic of Application Security Tests.

When performing requirement-driven testing in application security, you should keep in mind application security is not something fixed and static but rather something that needs to be constantly maintained and updated. Therefore, it is essential to continue performing regular security tests, even after an application is released into production, because they help ensure that software is secure and reliable, protecting both users and the organization itself from security threats.

By Kelvin Bryan da Silva
In this article, we will continue the series of publications on the OWASP SAMM (Software Assurance…
END_OF_DOCUMENT_TOKEN_TO_BE_REPLACED
Share
Application Security

By Gustavo Pires
This article is part of a series of publications based on the OWASP SAMM project, if you are…
END_OF_DOCUMENT_TOKEN_TO_BE_REPLACED
Share